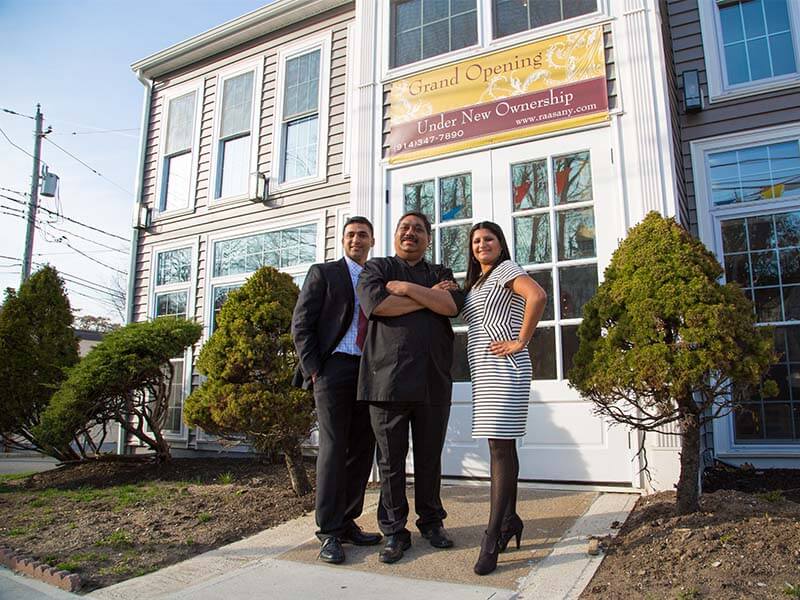 (Elmsford, NY) – The name RaaSa is soon to be on the lips of every foodie in Westchester, as the restaurant in Elmsford nears its May 12th Ribbon Cutting date. The event will make official the re-launch of the business under new ownership, and with a Michelin Star awarded, and James Beard Foundation recognized executive chef at the helm.

The restaurant on East Main Street in Elmsford has worn the name RaaSa since Spring 2014, succeeding the former Malabar Hill that occupied the same space. Though the name will be unchanged, the menu, the décor, and the restaurants mission are all new. In this incarnation, RaaSa stands poised to join the highest echelons of Westchester’s fine dining establishments.

RaaSa’s new owners, Ashok Salian and his wife Priya Kapoor-Salian have very lofty goals for RaaSa indeed, goals that are brought well into reach by the addition of the renowned Chef Peter Beck to RaaSa’s kitchen. Ashok, speaking about Chef Beck, shared:

“We brought Chef Beck in because of his flavors, because of his incredible skills, but also because his vision and our vision for RaaSa fused so well.”

Chef Peter Beck was born in New Delhi, India, and has excited palates around the globe, with stops in the U.K., Singapore, Hong Kong, and Thailand, among others before settling here in the United States. Chef Beck has been responsible for elevating Indian Cuisine in New York City, where he was noted as one of the James Beard Foundation’s “Top Chefs of 2002”. Chef Beck is a culinary innovator whose restaurants in New York have garnered numerous accolades, including elusive Michelin Stars at Tamarind and Benares.

Chef Beck speaking of his vision for the future of RaaSa in Westchester, said;

“At RaaSa I want to do something different. India is very big, and most Indian restaurants focus on the food of one region. I want to bring together flavors and ingredients from across the many regions of India. I want to bring together the ingredients of a Michelin Star restaurant to Westchester. It’s not just about the food, it is about the plating, atmosphere, the service, it is about creating an overall experience,”

RaaSa’s husband and wife ownership team have a background in hospitality and specifically in fine dining. Ashok attended culinary school in India, before moving to the U.S., his wife Priya studied culinary arts in New York. The two first met while working for J.W. Marriott in Phoenix, and were later part of the team that launched highly acclaimed Tamarind Tribeca, where they first met Chef Beck. The couple works closely to manage RaaSa, and each plays to their individual strengths. Priya manages the front-of-house and oversees RaaSa’s catering program, while Ashok is responsible for back-of-house operations, as well as being RaaSa’s mixologist, creator of their fantastic cocktail menu.

The restaurant is currently in a soft-open, as Chef Beck and his team prepare for RaaSa’s re-launch on the Westchester dining scene. The Ribbon Cutting will be on Tuesday, May 12th from 6:00 to 8:00 PM, and will be emceed by radio host and food writer Kate Schlientz.

Release by: Enormous Creative is an Advertising and Public Relations firm with locations in Westchester and New York City specializing in creative content and strategic marketing to promote awesome brands.